As Japan has been one of the hotseats of video game development from the early digital age, there is certainly plenty to recover still from unpublished games and prototypes to art and untold stories. As one example, earlier this year the society was donated a treasure box full of discs from Nihon Falcom Corporation. The company was founded in 1981 and is still actively producing new games. Their donation included amazing artifacts from the 1980s including 262 discs, a number of them Famicom Y (Famicom/NES Disk System) replacement disks meant for customers whose original copies were defective or bugged.

The replacement discs are clean and unused, in completely original form, which makes them very interesting research pieces.

The society is also very serious about protecting and preserving the Japanese digital history: they have a temperature and humidity controlled archive room to maintain the fragile discs, media, papers and photographs as well as possible.

You can also watch this video from Hardcore Gaming 101: 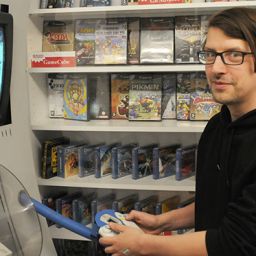 On Friday October 9th, 2020, starting at 12 o’clock in the Faculty of Information Technology and Communication Sciences at Tampere…

The interactive past returns – conference about gaming archaeology

Digital data can be easily lost with no chances of bringing it back. Sometimes you can do miracles, though. The…

Australian government has donated 0.5 million AU$ to “Play It Again: Preserving Australian videogame history of the 1990s”. The authors…